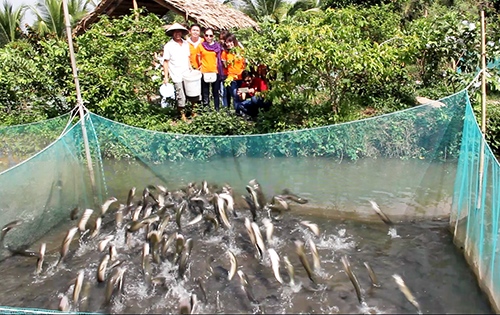 
Farmers have already developed community-based tourism, but Can Tho authorities seem to think the bigger the better.

Can Tho City is looking to cash in on a “flying fish” show that has wowed tourists to develop an eco-tourism site on an isolated islet, immediately triggering concerns that too many touristy activities would alter an otherwise serene area.

The move is part of a bigger blueprint that enlists investment in a number of socio-economic development projects in what is considered the capital of Vietnam’s Mekong Delta.

The tourism project in Can Tho will cost an estimated $50 million and cover the entire 74-hectare (183-acre) islet, providing tourists with modern entertainment and eco-tourism services, according to the blueprint.

Investors will be offered preferential loans and support to clear the site.

Son Islet lies in the middle of the Hau River that runs through Can Tho, and is currently home to 79 households.

Since mid-2015, locals have been developing community-based tourism services to give visitors a chance to experience southern life.

Last year, a farmer launched a show he nicknamed “flying fish” after training captive snakehead fish to jump out of the water in unison. The show has lured even more tourists to Son Islet and has been praised for its “uniqueness” and “creativity”.

Unsurprisingly, the master plan for Son Islet has immediately proved a tough sell to some skeptics who say the city should just leave the islet for the farmers instead of turning it into some kind of Disneyland for adults.

A VnExpress reader named Moon wrote in a comment: “Please just keep the islet in its primitive state”, while Nam Nguyen said: “The islet would be a better place if it is kept natural. The new project will make it lose its true style.”

Others wonder what will happen to the farmers who have already developed their own tourism services.

Only time will tell.