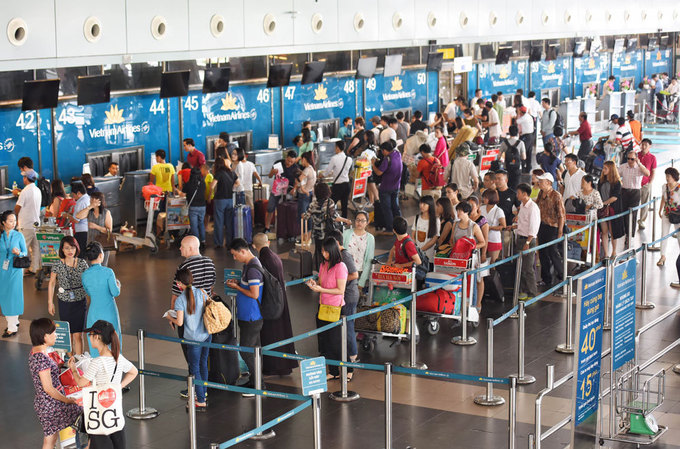 
The country served more than 94 million air passengers this year, including 13 million foreigners.

A source from the Civil Aviation Authority of Vietnam (CAAV) said the country’s aviation market has seen outstanding growth. The number of passengers has surged 17 times from two decades ago to the all-time high this year, which includes 13 million foreign passengers.

Noi Bai Airport in Hanoi welcomed the 94 millionth passenger on Wednesday, who was a Vietnamese man flying from Saigon.

“The services at Vietnamese airports have improved in many ways, but I hope carriers can reduce flight delays and cancellations as they mess with people’s schedules,” said Nguyen Van Huynh, the special flyer.

Airports across Vietnam accommodated more than 800,000 safe flights by 67 foreign carriers and four Vietnamese ones in 2017, up 10 percent from last year.

Yet delays and cancellations still bothered many customers.

CAAV reported 1,150 cancelled flights by the four domestic carriers in the first 10 months this year due to technical problems, weather conditions and other reasons. The unit earlier counted 14,000 delayed flights in the first six months of 2017, or 12.2 percent of all flights operated by Vietnamese carriers.

Rapid expansion at Tan Son Nhat hopefully will give it more space as of early next year. The airport now can afford to host 57 aircraft at a time but sometimes receives more than 70.