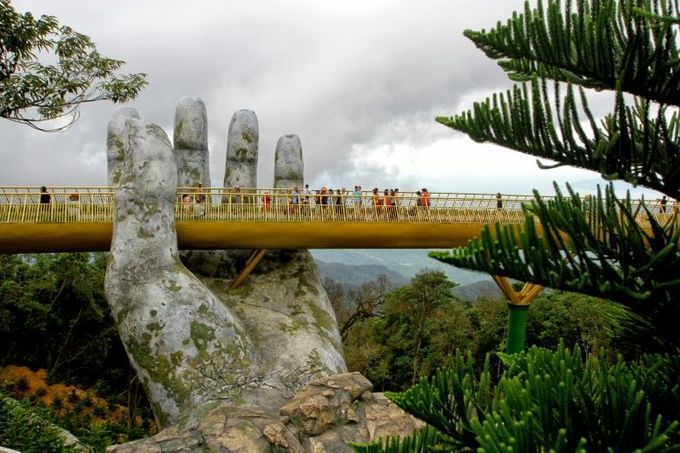 The bridge in Da Nang is designed to make visitors feel like they’re taking a stroll on a shimmering thread stretching across the hands of gods. Photo by AFP/Linh Pham

The Time magazine has listed it in its list of top 100 World’s Greatest Places for 2018.

Remarking on its architectural creativity, the magazine’s Julia Zorthian notes: “The two massive stony hands emerging from the mountains of central Vietnam may look mossy and cracked like ancient ruins, but don’t be fooled: they’re brand-new wire mesh and fiberglass supports for a striking footbridge that opened in June.”

Images of the two giant hands holding up the 150 meters long bridge at Ba Na Hills near Da Nang have gone viral and many international media outlets have remarked on the bridge, including AFP, Reuters and CNN.

Vu Viet Anh, Design Principal at TA Landscape Architecture that designed the pedestrian walkway, told Reuters that the bridge was designed to stimulate the image of the “giant hands of Gods, pulling a strip of gold out of the land.”

Other places on Time’s list include the Macan Museum in Indonesia and Tianjin Binhai Library in China.

According to Time, editors and experts at the magazine evaluated the entries based on quality, originality, innovation, sustainability and influence.

Offering grand views of mountains and forests from a height of almost 1000 metres above sea level, the bridge is set to attract increasing numbers of tourists to Da Nang and Ba Na Hills.