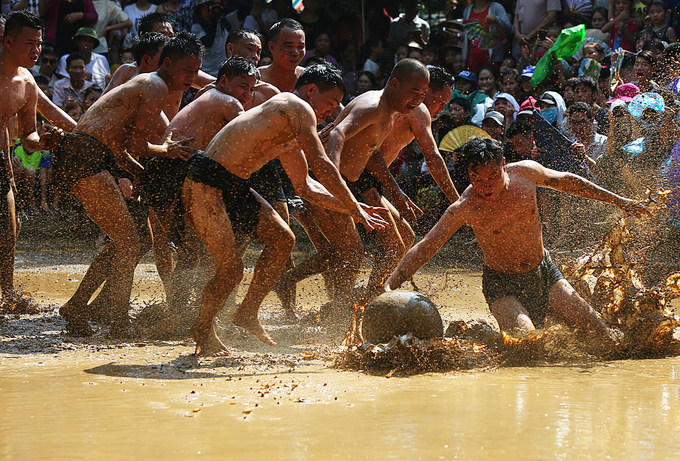 Young men compete in a marsh to grasp the ball during the three-day festival at Van Village in Bac Giang Province. Photo by VnExpress/Ngoc Thanh

National Geographic magazine has compiled a list of 25 extraordinary traditions around the world including a centuries-old ritual in Bac Giang Province.

The ball wrestling festival at Van village, in the northern province of Bac Giang’s Viet Yen District, is held from the 12th to the 14th of the fourth lunar month every four years.

It commemorates the victory of four brothers – Truong Hong, Truong Hach, Truong Lung and Truong Lay – over a bunch of demons in a mud-ball wrestling match in a marsh in the 4th century CE.

The festival features ancient rituals and spiritual beliefs of wet rice civilizations, with local farmers praying for bumper crops and good weather for the rice season.

“Reenacting the soldiers who served a village’s protecting gods, these men wrestle with a wooden ball in a centuries-old festival,” Natgeo describes.

The Natgeo list includes cultural festivals and “unique” rituals such as the UNESCO-recognized castell festivals in Spain, the Bun Bang Fai festival in Laos, the grueling “Gochak” ritual in India, the traditional Chinese martial art of taiji, and the Arirang Mass Games in North Korea.